Aluminium cans are incredibly popular across the globe, and they’re being used in everything from beverages to soups to pet food packaging to soda cans.

And if you’ve ever wondered how these cans are made, you’re in luck! We’ll break down the aluminium can making process from start to finish so that you can see exactly how your favourite aluminium cans are manufactured.

Understanding the Aluminium Can Specifications

The can specification depends on what food or beverage is being packaged. A 12-ounce beer can, for example, has a different specification than a 16-ounce soft drink can. However, all of these cans are made following the same general can making process. The exceptions are cans with an embossed pattern or an inner and outer liner design because they require another step in the process.

Once you have understood the specifications, let’s proceed with the actual aluminium can making process. 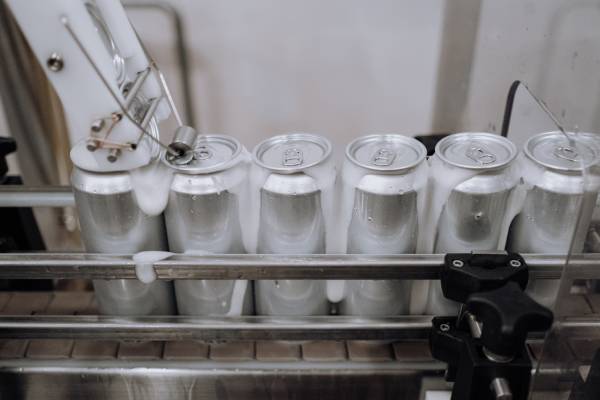 To make an aluminium can, you first need to procure a few key raw materials. The most important material used in the aluminium can making process is, of course, aluminium.

Aluminium is derived from bauxite, an ore usually imported from New Guinea and Jamaica. This ore is refined and smelted to obtain molten aluminium, which is then cast into ingots.

The base of aluminium cans consists of mainly aluminium. However, it may contain smaller amounts of other metals, such as manganese, silicon, iron, copper, and magnesium.

Polyethylene terephthalate (PET) can also be used in aluminium can designs with graphics on them. PET comes in opaque and clear varieties.

Both aluminium and PET also come in a range of purity levels. But for cans, you’ll need high-purity grades that have no oxygen or sulfur added. That’s very important.

In rolling, thin strips of aluminium are fed into a rolling mill. The thin strips are crushed into thinner and thinner strips, which are eventually turned into aluminium foil. The foil is then cooled in a refrigeration device called an oil quencher. A group of rollers turns and flattens out the foil, making it stronger and more flexible.

In this stage, circles are cut from the sheet. These circles, called blanks, would form the can’s bottom and sides. The blanks are typically 5.5 inches in diameter.

In the process of cutting circles, some materials are lost. In fact, about 12 to 14% of the aluminium sheet is wasted. However, manufacturers have found ways to put them to good use, recycling them and reusing them as scrap.

After the sheets are cut, the blanks are pulled up or drawn to form a small cup.

After that, another punch presses up against the cup’s base. As a result, the cup’s bottom bulges inward. This is done to create a shape that resists the pressure of the liquid or food the can will contain.

The previous stages leave the can a bit wavy in shape. These irregular ripples are called ears. And in this stage, some of these unnecessary materials are lost as they are trimmed from the top of the can to level the walls.

Once the ears have been trimmed, the can is cleaned and designed with its label. After that, it is squeezed a bit at the top to create a neck. This neck has an outward flange at the top, which will be folded once the lid is inserted.

Unlike the base and sides of the can, the lid is often made of a different material that is stiffer and stronger. It still has aluminium, but it has more magnesium than other parts of the can.

The lid’s centre is pulled upward slightly and drawn by a machine to create a rivet. The pull tab is then inserted under this rivet. Finally, the lid is secured and scored.

At this point, the neck should be formed. This means that the can is ready to be used and filled.

In this stage, the can is positioned against a filling machine, and the food or beverage is poured in. Next, the lid is added. Then the can will be sealed by bending the upper flange around the lid. Lastly, the can is seamed shut.

The Future of Aluminium Can Making

It’s still too early to predict what will happen in the future of aluminium can making. But we are seeing a shift in aluminium can designs with smaller walls designed to conserve the amount of aluminium that goes into them.

Since the demand for these cans is rising and increasing, it is safe to assume that the future of this industry is heavily dependent on can designs that save materials and money.

Explore More of the Aluminium Can Making Process!

Aluminium cans are used for packaging food and drinks, and they are now being used more often not just in beverages but also in packaging household items like tea bags and coffee powder. And yes, the aluminium can making process may seem too technical; however, we hope we have explained the process in the simplest way possible. We are the preferred metal can supplier in Singapore, producing metal cans for various food and drink products and more. Our cans can be printed with any design you have in mind. Feel free to reach out to us for your metal can needs, and we will always deliver.

Metal Cans for Canning Foods: What You Need to Know

7 Reasons to Use Metal Cans for Canning Foods